Binary economics is very practical. An illustration is the interest-free funding for low-cost social housing, a waterworks, bridge, sewage works, road or hospital — the use of national bank-issued interest-free loans halves, even quarters, the cost.  Every day, globally, 25,000 people die from the effects of dirty water.[10]

Three more illustrations are:-
* a halving or more of the usual cost of micro-credit for poor people
* the enabling of any individual in the population (from a baby to a retiree) to become a shareholder in one of the great corporations — the shares would be full pay-out ones thereby creating a considerable income for the holder.
* Interest-free loans for older students.

The earnings of full pay-out shares are expected to be five to nine times existing earnings.

One consequence is that in highly capitalised industries a company/corporation would be capable of providing good income not only for employees but also for non-employees as well.

Readers may wonder exactly how employees (or, in highly capitalized corporations, non-employees as well) acquire their full payout shares and the diagram below shows how this is done:- 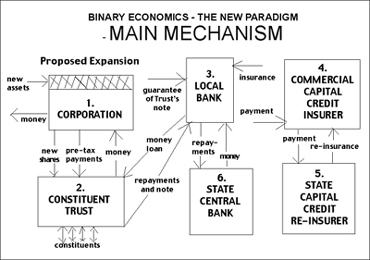 The state central (national) bank (6) creates interest-free money and lends it to the local bank (3) which will lend it to the constituent trust (2) IF the main binary principles (wide ownership, ability to repay, collateral or insurance substitute (4) (5) and full pay-out) are forwarded.

However, for a lending to local government (e.g., for a public capital project) the diagram would be simplicity itself — the state central bank just lends interest-free to the local government which repays the money.

NB The financial savings of individuals are not used as the source for funding the full pay-out shares — the source of the interest-free financing is ultimately the national bank and repayment comes out of future earnings.

The national bank is used as the source of the loans for the shares to emphasise that the national money supply is NOT that of a mere private grouping (as is the case with banks today) but is society’s money supply which (although funnelled through the banking system making an administrative charge) can be interest-free for the purposes of an efficient, just economy. Indeed, where the financing of new productive capacity is concerned, interest is not necessary.

Binary policy results in national bank-issued interest-free loans being available for the purpose of development and spreading productive (and so consuming) capacity to every individual in the population thereby enabling producers and consumers to be the same people and, at the same time, forwarding social and economic justice.

In practice there would be two rates of interest — interest-free (for the binary purposes as above) and interest-bearing. Economies should not be reliant on foreign financial capital and so national bank credit should be used with capital controls being available if needed.

Binary economics is fundamentally different from all forms of conventional economics (be they expressions of right-wing, centrist or left-wing theory).[4]  Thus, unlike most mainstream economics, binary economics accommodates belief in God, unicity and ethics.[5] It directly addresses the main environmental issues; does not assume that humans only follow their own immediate short term self interest; ends economic colonialism; appeals to people of faith and of good faith;[6] and does not assume that humans (as distinguished from capital instruments) do all, or nearly all, of the physical creation of wealth.[7]

Binary economics is not a “third way” between capitalism and socialism: it expresses a new paradigm . Binary economics co-operates with, and supports, anybody who understands the uses of the national bank-issued interest-free loan supply.

As a study, binary economics is not reductionist,[8] does not ignore the imbalance in power relationships between people,[9] and does not assume that extensive poverty is inevitable. (NB. 55% of the world’s population lives on under $3 per day: every day an estimated 25,000 people die from the effects of dirty water).[10] Being concerned with social justice and economic justice it also notes that allegedly successful ‘free market’ economies show symptoms of profound failure — thus figures from the 2004 Census show that one fifth of Americans live on under $7 per day.[11]

Moreover, this happens in a country which is the richest in the world and which claims to be the embodiment of a perfect, efficient and just ‘free market’.  Furthermore, America spends over 18% of its national income on health (as compared to 10% in the UK) and with longevity outcomes inferior to those of the UK and France. Forty eight million Americans have to rely on food stamps.

Main Cause of Poverty

Binary economics establishes that lack of access to productive capital (in various forms) is the main cause of poverty and of structural imbalance in a market economy so that producers and consumers are not the same people with consequent imbalance of supply and demand and a general inability to further social and economic justice. Moreover the institution of interest (as distinct from administration cost) operates as a giant hoovering operation sucking up wealth from the poor and transferring it to the rich.

It follows that productive capital must become as widely spread as possible. Furthermore, productive public capital (e.g., waterworks, sewage works, roads, bridge, hospitals and housing) must be spread and human capital developed via the provision of education and interest-free loans. All newly-created money must be interest-free and used for the purpose of developing and spreading efficient productive capital to all people in the society.

Binary economics addresses a number of weaknesses in the current economic system which are dismissed by conventional economics as being of no, or low, importance. The weaknesses include:–
* almost all of the modern money supply is in the form of interest-bearing debt created and owned by the banking system.  (In the UK over 95% of the money supply is created in this way: there are similar percentages in other countries).[12]
* the present money supply is generally not directed at productive (and the associated consuming) capacity but instead goes into derivatives, rising asset prices, consumer credit and putting everyone — individuals, towns, corporations, towns, cities, countries — into ever-increasing debt.[13]
* at present two lots of financing are required to keep the system going — one lot for production and a separate lot for consumption. The two lots are continually inflationary whilst, all the time, more and more loan money must be created (by the banking system) if the whole economic and financial system is not to collapse. Inflation is inevitable with the present system.  (NB.  Binary financing (which is called simulfinancing) requires only one lot of financing and is counter-inflationary).
* forms of productive capital remain narrowly owned and there is no policy to spread the ownership of productive (and the associated consuming) capacity throughout the population[14]
* people do not have their own independent incomes

* the practices of the IMF and World Bank which deliberately trap countries into never-ending debt; keep productive capital (and associated consuming power) narrowly owned; and, in an abuse of power, are generally bent on ripping off the wealth of poor countries
* in practice, economic colonialism * in practice, racism

Binary economics redresses those weaknesses. Thus economic colonialism is ended by allowing countries to have control over their own money supply, control over their own assets, and freedom from international debt. No country should ever borrow foreign currency; instead all countries should always use their own currency. Moreover, opposition to racism has little meaning unless it is manifested in practical, everyday material improvement and binary economics provides this by spreading ownership thereby enabling the spreading of the associated incomes.

Binary economics does not expropriate or take: rather it enables everybody to build.

See also About the Author

Next page: The Competence