Binary Economics is the expression of a new universal paradigm or new understanding of reality that creates a new economics, a new politics, a new justice and a new morality.[1] Implementing John Rawls’ property-owning democracy, it also addresses the big environmental 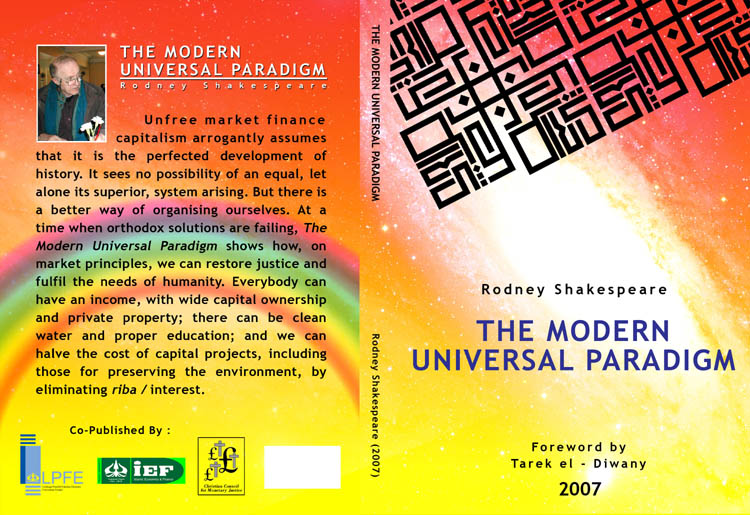 issues (e.g., by enabling tidal lagoons and deep-water turbines to give clean, cheap energy generation).  Moreover, it  is very relevant  to resolving the consequences of globalisation and the technological shift which smash out traditional, secure, well-paid jobs and then substitute the insecure, low-paid, temporary, part-time, zero hours contract jobs of the ‘gig economy’.   As a result, there has developed  a heavily indebted ‘precariat’ (Guy Standing).

Forwarding economic democracy as well as political democracy, Binary Economics ensures that, over time, all individuals come to have ownership of, and access to, efficient productive capacity and the benefits thereof.  In this way it makes certain that every individual has a genuine income.  Thus,  for example, those who, unpaid, today care for others, will have income. Moreover, by decisively spreading economic power widely to individuals, it is the only possible long-lasting bulwark against authoritarian and fascistic regimes.

NB. The global economy is profoundly flawed and is moving towards slump. However, over time, Binary Economics corrects the flaws and so provides hope for the future of humanity.

Binary Economics is profoundly co-operative and community-minded; it promotes wide ownership and the economical building of public and environmental projects. It is property-owning democracy put into practice.

Rather than homo economicus, the basic principles of Binary Economics are  homo reciprocans and homo co-operans. Without the new modern universal paradigm — which is relevant to all societies including modern Islam — there will be no peace, nor an end to colonialism and racism.

Meaning of ‘Binary’ as in ‘Binary Economics’

‘Binary’ means ‘composed of two’ — there are two factors in wealth creation (labour and capital) and so two ways by which people may genuinely earn a living (via a job and/or via capital ownership).

People generally think that all, or most, wealth creation is done by humans. However, ever since the start of the Industrial Revolution, wealth has been more and more created by capital instruments (e.g., machines, technologies, patents, buildings — anything which is non-human, capable of providing an income and which is not necessarily owned by everybody).

Sometimes, of course, humans do a large part, even all, of the wealth creation but, today, the capital instruments do most (and sometimes all) of the creation as in automated processes and factories which are continually smashing out the old, steady jobs and substituting insecure, temporary, low-paid ones.

Binary Economics, however, understanding what really does do the creation of wealth, ensures that, over time, EVERY person comes to have an independent capital holding (producing a good, steady income) which is in addition to, and separate from, any income they may, or may not, get from their labour.

Crucially, therefore, Binary Economics provides a Basic Income but one which is different from other forms of Basic Income in that binary interest-free financing actually develops the productive side of an economy in an efficient way while, at the same time, spreading widely to individuals the results of the production thereby ensuring a genuine balancing of supply and demand.

As a result, the binary Basic Income (unlike other forms of Basic Income) comes from a genuine improvement and strengthening of the economy linked with a widespread distribution of the resulting income.

1. Commercial banks to lend (at interest), as they wish, only their own money and, with permission, that of depositors.  The commercial banks (via a rise to 100% banking reserves) are not allowed to create new money.
NB. This creates a limited pool of money enabling reasonable interest rates to be paid to depositors.  Overall, over time, Binary Economics eliminates interest from most of the productive economy but is unable to do so in the area where the private sector (and that includes Islamic Finance) demands interest.

NB.  Today, the banks create 95% of the money they lend out of nothing by simply pressing computer buttons.  Interest and administration cost are added and the money is then NOT lent for the spreading of productive capacity to everybody in society — instead, it goes into rising asset prices and putting everybody into debt.

2. Central (or National or European) Bank interest-free loan money is issued for the spreading of wide-ownership productive capacity (and thus the associated consuming capacity), over time, to every person in society.

This is using society’s money supply for everybody’s benefit and is counter-inflationary because new, efficient widespread productive (and consuming) capacity comes into existence while the money which created it is repaid and cancelled.   NB.  Growing inequality happens because most people are denied access to productive capital.

The interest-free loan money also enables central and local government to build public capital, social housing and environmental projects at one half or one third of the existing cost.

3. The Central Bank interest-free loan money is administered by the commercial banks taking account of:-

For this lending the banks are allowed to make a reasonable administration charge.

4. The Central Bank need only make a  periodic check on commercial banks to ensure that the interest-free loan supply is being used specifically for the spreading of efficient productive capacity.
Any commercial bank abusing the privilege of administering the interest-free loan supply (for the benefit of everybody in society) will lose that privilege.

A detailed diagram of the main binary mechanism can be found on the Implementation page. See separate page.

In its economics aspect, Binary Economics is a market economics whose markets work for everybody.  Furthermore, it upholds private property but private property (and the associated income) for everybody, not just the few.[2]  This is the implementation of John Rawls’ property-owning democracy and a summary is:- ‘a justice which creates efficiency and an efficiency which creates justice.‘

An alternative summary is:- ‘the use of national bank-issued interest-free loans, administered by the banking system, for the development and spreading of various forms of productive (and the associated consuming) capacity thereby creating a balance of supply and demand with producers and consumers being the same people (as required by Say’s Theorem) and forwarding social and economic justice.‘

No subsidy is involved. Existing money (e.g., a bank’s capital or, with permission, the deposits of customers) may be lent in ways including interest. However, newly-created money MUST be lent interest-free for developing and spreading the real economy to  (and ensuring proper housing for) every individual in the population.

In its intent to involve people in ownership and participation, Binary Economics has affinity with Distributism; with John Rawls’ Theory of Justice; with James Meade’s Efficiency, Equality and the Ownership of Property; with the worker co-operatives of the Emilia-Romagna region of Italy and the Mondragón Cooperative Corporation of Spain; and with the work of Gar Alperovitz, The Democracy Collaborative, the Centre for Local Economic Strategies and others.